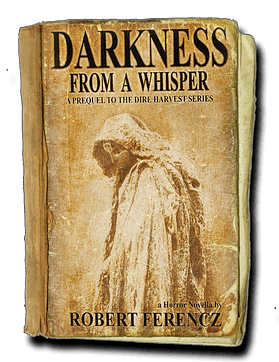 Darkness from a Whisper

Who knows what nightmares lurk beneath the dark recesses of the earth? Such places are better left undisturbed. But in 1906, in an unexplored section of a Pennsylvania coal mine, a young immigrant named Sean Collins unearthed what no man was ever intended to discover. What Sean didn’t know was that his curiosity and ambition would release a diabolical force into the world bent on the absolute suffering and destruction of all mankind.

The struggle for the soul of humanity unknowingly begins here at the bottom of a dark mine shaft, by the unsuspecting hands of an innocent kid whose curiosity will lead to a century of unbridled torment. But this horror about to be turned loose upon the world is only the beginning. It is here, in the depths of the earth, where you will discover the origin of true evil. Darkness from a Whisper is the prequel to the terrifying series, Dire Harvest.